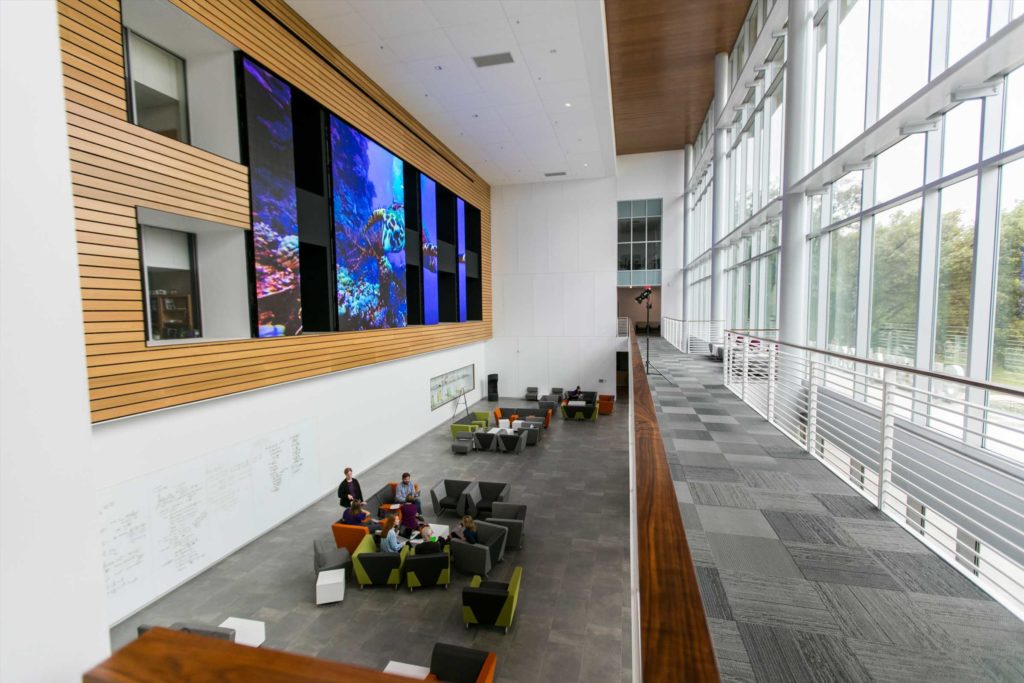 With just over 5,000 students and a goal of making a difference in the world, Abilene Christian University has been ranked as one of “America’s Top Colleges” by Forbes Magazine. Much of its growth is attributed to a Vision in Action plan established in 2014. This $75 million plan to raise funds for three new science buildings and two stadiums for the growing campus needs set the course for the largest transformation on campus in over 50 years.

Building on our previous successes working on the ACU campus, we competed for the Vision in Action projects and won. The President of Abilene Christian University stated, “We did our homework and once again chose Hoar Construction.” Placing a great deal of trust in our team to work alongside several architects and trade partners to complete four of the five Vision in Action projects, the University’s vision became a reality as each individual phase was turned over successfully and with minimal disruption to existing campus operations.

The University’s emerging science programs were in desperate need of facilities that could support their academic expansion. The three-phased plan included exterior renovations to the existing Onstead Science Center, landscaping redevelopment of the science quad, and a new ground-up science laboratory building, the Halbert-Walling Research Center. The new building would have a lecture hall, modern classrooms, research labs, a class 100 cleanroom, and administrative office space for the science and engineering departments.

With the challenges of meeting the program demands within the budget and time frame allotted, our team collaborated closely with the design team and held several focus groups with end users. By reprogramming certain features in the science program, we were able to reduce the cost and provide a million dollars in savings to the University. Through precise planning and excellent trade partner relationships, total design and construction was concluded in an impressive 20 months, one month earlier than anticipated. Even with programming enhancements, we finished the project within 1% of the established GMP.

SIGHTS ARE SET ON DIVISION I

Academics were just one focus of the growing campus needs. The ACU leadership spent several years evaluating the best option for the athletics program, which concluded in a decision to transition to NCAA Division I status. As a part of the reclassification process, ACU athletic facilities needed an overhaul, including the construction of two new stadiums. Backed by the Vision in Action program, we led the construction of the new stadiums. The first stadium would house the track and field and soccer programs, and the second would be the first permanent on-campus venue for the Wildcat football team since WWII.

It had been 50 years since the last on-campus football game, and the ACU community was eager for a venue on their beloved campus where they could cheer for their Wildcats team. The challenge was making this a reality as the original cost estimate early in design came in $9 million over budget. Our project team began to strategize. We had four weeks to identify a budget solution that could be presented to the ACU leadership and the donors. Working with the architect, we were able to present several options to reduce cost while optimizing design. Recommendations included modifying the 100% precast structure to a combination of precast and slab-on-grade, lowering the stadium by 2.5” to decrease the amount of materials needed, and identifying alternate materials. Our team also suggested modifications to the footprint of the press box which decreased the cost by 21%. Even with the setback of receiving construction documents just one year prior to completion, having limited local labor, and experiencing 40 days of weather delays, the extensive preplanning by our team allowed us to stay on schedule and make the monumental first game of the season in their new home stadium a dream come true for the University, the players, and the fans.

The science buildings bring innovation and new technology to the campus while remaining within the aesthetic of the existing buildings. Through a straight-forward and modern approach, these buildings take the campus to the next level, integrating modern efficiencies and technology to enhance the student and faculty experience. The football stadium incorporates traditional elements, such as the iconic cross symbol noting ACU’s Christian heritage. Natural materials such as wood veneer, porcelain tile and stone counters bring a vibrancy and traditional feel to the stadium. The approach to tradition meets transition allows the community to enjoy an upgraded facility while feeling at home watching their Wildcats.

It was important to us to understand the ACU traditions and their goals for the future. Working with them as a partner and knowing their key drivers, we applied our attention to detail and our exacting quality standards to all four projects and built them to withstand the test of time. The renovated Onstead Science Center, the Halbert-Walling Research Center and the two stadiums advance the ACU mission and will impact this community for years to come.