The Building of Hope 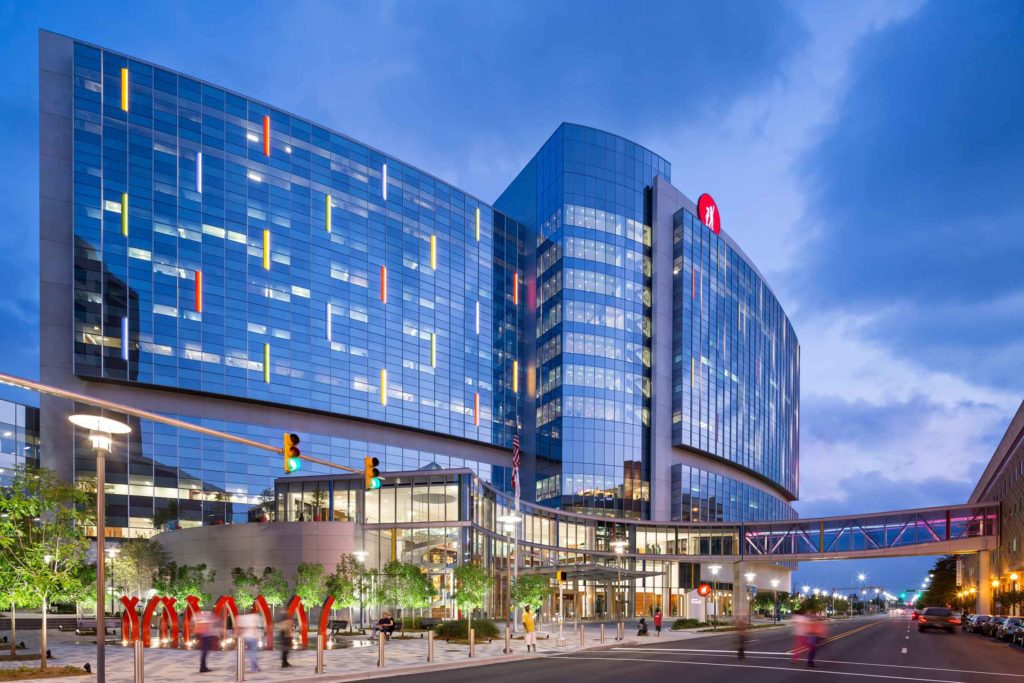 Children’s of Alabama provides unmatched care to children and their families through exceptional doctors and support. But what they needed was a facility to match that care – a modern, sustainable building that would offer the latest technological advances and serve as a beacon of hope for sick children and their families for generations to come. What resulted was the single largest hospital project in Alabama’s history. Fulfilling this ambitious mission required 2,800,000 highly coordinated man hours, six months of preconstruction planning, three years of construction, unwavering attention to detail to overcome countless challenges along the way and integrated project delivery at its finest.

CHALLENGES AROUND EVERY CORNER

Actually, this project had very few corners (more on that later). The Children’s expansion sits curb-to-curb, in the middle of a university campus, on one of Birmingham’s busiest streets. With hospitals adjacent and businesses all around, a systematic approach was necessary to avoid interrupting the hospital’s services. Coordinating more than 1,200 workers, three tower cranes and five mobile cranes on this confined site – as well as the need to shut down a busy street and blast a tunnel under it – made this project a true challenge. But that’s just the type of challenge we love.

While location required careful organization and logistics management, geology required hustle and creativity. What looked straightforward in plan proved to be completely unpredictable in practice. The foundation included 229 caissons with an expected depth of 35 feet on a 30-foot grid. Once drilling started, the surprises began. In some spots, only eight feet was needed to find solid rock for caissons; other places required drilling 110 feet or more. There was no pattern and no easy way to predict how deep each needed to be. Compared to typical projects where 7 to 8% of the casings are left in the ground, 70% were left on this project to control the ground water while the concrete was poured and set to prevent the concrete from migrating into rock voids. To compound the issue, the project’s footprint contained three sinkholes: two minor ones that required 100 cubic yards of grout to fill and a larger one that required more than 600 cubic yards. This could have wreaked havoc on the schedule. In this case, it didn’t. Sure, it set the project back, because we had to – literally – dig ourselves out of a hole. But, by working with the team, we completely re-sequenced the project to allow construction to move forward in other areas while the caissons were completed. The result: schedule deficit overcome and project completed ahead of schedule.

THEN THERE WAS THE CURVE

The Children’s expansion has a curved structure with 18 different radiuses and only one 90-degree corner on the building’s exterior. As geometry goes, this meant instead of dealing in feet and inches, we were working with degrees and minutes. In the initial review of the project contract drawings, we determined that the radius measurements were carried to only two decimal places. This may seem sufficient to most, but that level of accuracy could have resulted in the building being off by half a foot. Our team discussed this concern with the engineers and then worked with them to create more precise calculations. By carrying their figures to four decimal places, the building was constructed within one-eighth of an inch of the original plans. This curving façade is clad on all sides in glass curtain wall with an intricate pattern of transparencies, colored panels and accent lighting. To accelerate installation, Hoar worked closely with the curtain wall subcontractor to prefabricate the façade in an off-site warehouse, generating two-story sections that arrived at the site preassembled and ready to hang. The resulting product was not only installed less expensively and more safely, but quality was improved since the majority of the fabrication occurred in a conditioned warehouse at a manageable height instead of on the jobsite. As an added benefit, an installation that normally would have taken four months was completed in just 14 weeks.

A BETTER SOLUTION. A BETTER PRICE.

It’s no surprise our client wanted the best product at the best price. It’s what every client deserves. So we challenged assumptions and looked for opportunities. The original design of the Children’s expansion called for a steel frame. Before proceeding, however, we analyzed market conditions, consulted with the engineers and collected quotes for different material prices. What resulted was a cost-effective cast-in-place concrete system instead of steel. This created its own challenges, but ones that could be overcome, including 50 major concrete pours starting at 1:00 in the morning and 2,000 girders, beams and openings to locate and size (and not a single one requiring replacement). In the end, the team met the aggressive schedule, improved quality and bested the construction budget by more than 15%.

AND YET ANOTHER CHALLENGE

Halfway through the project, the owner-furnished equipment coordinator was removed from the job. At the time the equipment planning was far behind and there was little accurate information available. This lack of information hampered the progress of the job as inwall rough-ins and backing installation had already commenced. Wanting to keep the project on schedule, we resolved to take on this challenge ourselves, collaborating with Children’s Facilities Department to validate, finalize and coordinate the OFE information. We also took the lead in contacting vendors directly to coordinate construction and ensure correct infrastructure was put in place. We met weekly with Children’s to mitigate any potential issues. Taking on this responsibility paid off by keeping the project on schedule and within budget.

AN IMPORTANT MEMBER OF OUR TEAM: TECHNOLOGY

Construction professionals are accustomed to thousands of pages of drawings, specifications, codes and manuals. Instead of carrying those, superintendents on this project carried one single device. In April 2010, iPads were just coming to market, and we saw them as potentially powerful tools to enhance productivity and quality. We studied the product in detail and applied the newest technology, even writing apps that brought all codes, standards and relevant construction information together. No more rolled sets of drawings, no more walking to the trailer for information. Everything was at the superintendents’ fingertips, easy to update and accurate in real time for everyone on the job. Adopting the newest technologies allowed superintendents to spend more time on the site managing work, resolving issues and ensuring quality for our client. iPads are one thing. Applying an integrated Building Information Modeling (BIM) process to generate and manage the physical and functional characteristics of the project is another. For the Children’s project, Hoar led a coordinated effort including the design team, subcontractors and consultants to use 4-D scheduling and 5-D estimating. By applying BIM, more than 20,000 above-ceiling clashes in the hospital were resolved … prior to construction. For our client, it was like having a construction and management crystal ball. With the building now open, the model is being used in the 6th dimension as a facility management system that notifies the client when to do maintenance and helps troubleshoot issues more economically and more effectively.

KEEPING THE END USER IN MIND

We build every project with the end users in mind. After all, if they’re not completely satisfied, we can’t consider the project a success. With the Children’s expansion, we managed monthly interior walk-throughs with physicians, nursing directors, charge nurses and even RNs and LVNs to gain their insight. As expected, these walk-throughs produced great ideas and resulted in design changes, some of which occurred after construction was already completed. However, bringing the best ideas of the end user to bear was well worth it. As we continue to work at Children’s, we have the opportunity to witness the end users’ excitement about their new facilities first hand – and that’s what matters most.

An important part of any construction project for Hoar and its clients is the impact it can have on the community. Proudly, Hoar and Children’s of Alabama were able to go beyond serving children and families and impact the broader community in important ways. Over 4,300 jobs were created throughout the project and a new mentoring and minority contractor program meant 12% of subcontracts were awarded to minority and disadvantaged firms – a record for a large project of this nature in Alabama. By working closely with these community firms in training and on the jobsite, they were able to acquire new levels of skills they can use for years to come.

PUTTING THEIR NAMES ON THE PROJECT

Most people will never know about the names. But there, on the concrete foundation, one by one, the team stenciled the names of 200 children – children who were patients at Children’s of Alabama. Why do this? Why stencil their names on the foundation? It’s simple, really. For all of us on this project, replacing a 50-year-old, overcrowded hospital with a state-of-the-art facility was more than a job. It was an opportunity to help Children’s fulfill its mission to create a place where suffering children and their families could find the very best care today – and for generations to come. Those 200 names inspired the medical staff and every one of the thousands of workers on the site to step a little faster and work a little harder because we knew that the most important thing we were building was hope.