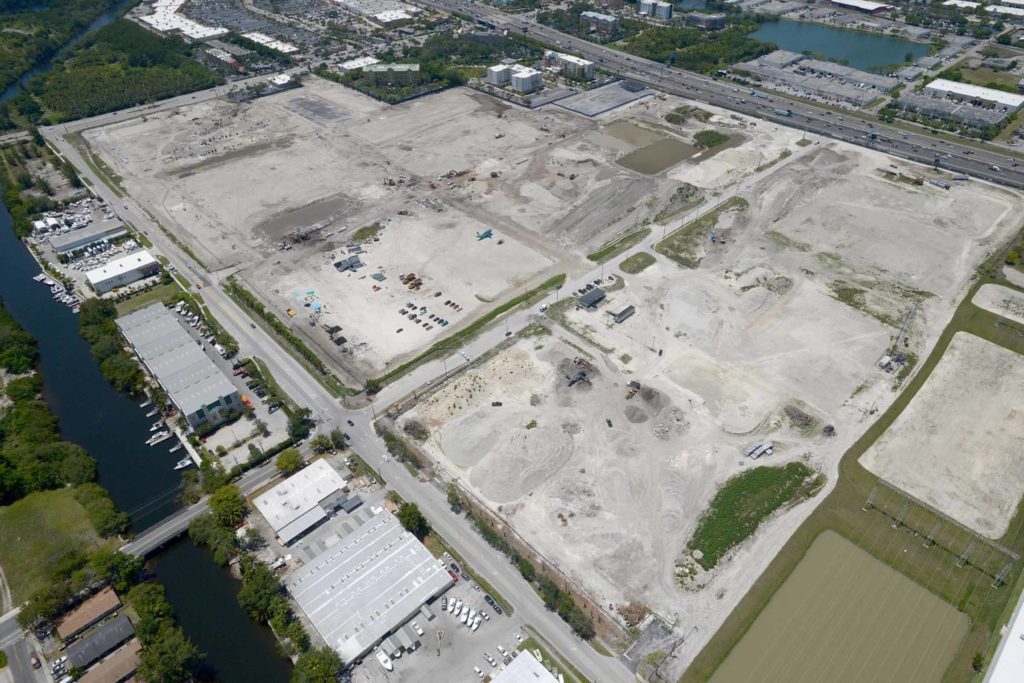 Dania Pointe, a 102-acre massive retail and mixed-use destination, started out as a former industrial and partially abandoned mass of land. Our client challenged us to help bring their vision to life and the first step was to redevelop the large brownfield site according to Environmental Protection Agency (EPA) regulations. Through planning every stage of work closely with our client, engineer, and trade partners, and by collaborating closely with local municipalities, we were able to successfully transform a barren brownfield site into a blank canvas that can support 1 million square feet of buildings and surrounding hardscapes.

The original site at Dania Pointe was not the typical site for a massive development. Our first step in early preconstruction was to identify the site’s many challenges and develop a plan to overcome them. To understand why the property in Broward County posed so many problems, it’s important to first understand its existing conditions at the time of purchase. The site consists of multiple parcels of land, assembled by our client, Kimco Realty, to be the future home of a shopping and entertainment destination. Part of the site was an abandoned brick and mortar factory. There were several existing manufacturing structures on site, sitting idle and rusting into the ground. A gas station on the property had seeped contaminants into the surrounding soil. Part of the site was home to an abandoned amusement park. In fact, part of our demolition included tearing down a rotting wooden roller coaster, once iconic to the area. To identify additional poor site conditions under the surface, Kimco ordered a geotechnical engineering survey. The survey showed multiple borrow pits on site that had been backfilled with trash and organic materials which created bridged areas of soil underneath.

Our first step to improving the site at Dania Pointe was demolishing the existing structures. From there, we led the complicated process of performing widespread remediation of the soil according to EPA-recommended methods. Once the remedial work was done, not only was the soil clean but our client saved in environmental tax credits.

The next step was locating and fixing the deep ponds and pits throughout the site. We worked with our client and the civil engineer, Kimley-Horn, to perform deep dynamic compaction for more than 40 acres. To put that in perspective, we covered the same area as 20 city blocks. The DDC process consists of using a crane to raise and drop weighted blocks onto the ground, where the geotechnical report identified as potentially unstable. The compaction insures proper support of building foundations. We removed roughly 500,000 cubic yards of unsuitable material from the Dania Pointe site before we graded and prepared the entire site for construction.

Our extensive sitework included resolving other issues that lay deep below the ground. We had to reroute approximately 2,000 linear feet of FDOT storm drainage that ran right through the middle of the site. Gas, cable, and electrical lines that feed the surrounding neighborhoods, as well as fiberoptic communication lines that feed the Fort Lauderdale International airport also ran through the site. Our team successfully rerouted these lines without any negative impact through extensive planning with all our trade partners involved.

To reroute all the utilities and lines that ran through the site, we had to directional drill borings around the surrounding area — which is one of the busiest, and most highly-traveled areas in Florida. The project team bored near and underneath interstates, federal highways, and busy intersections. We also drilled underneath one of south Florida’s busiest railroads and underneath a canal — which required divers to complete the work. The key to the successful completion of these installations and reroutes was developing detailed logistics plans to ensure we completed the work safely with minimal impact to traffic.

Our client’s plans included extensive infrastructure improvements to the site to account for the increase in traffic their new development will bring to the area. Fourteen thousand linear feet of sewer pipe was installed which will be available for other redevelopments to tap into in the future. In addition, our team enhanced the surrounding road infrastructure — working closely with multiple municipalities and government agencies. We added lanes to the roads leading in and out of the development, added multiple signaled intersections, and built transition lanes to I-95 from the development’s main road to accommodate increased capacity. For Broward County alone, we rebuilt nearly a mile of road to widen it to support the increase in traffic.

The success story of the extensive sitework at Dania Pointe comes down to logistics. Our project team deftly developed and managed multiple complicated plans involving rerouting critical utilities and coordinating traffic through some of Florida’s busiest intersections. We were able to communicate and coordinate with all the municipalities and stake holders involved to perform all the required sitework without any incidents, loss of utilities, or negative impact to the surrounding communities.