It’s Not Easy Being Green 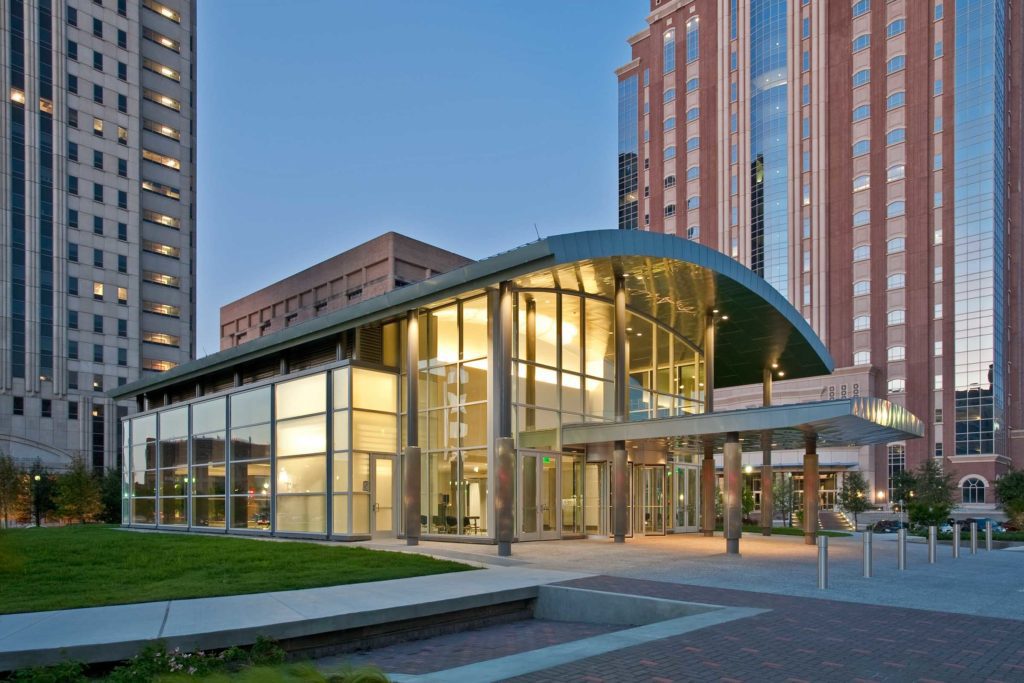 Houston has long been considered a concrete jungle. Wanting to attract more visitors downtown, the city and Harris County sought to change this perception. As part of its greening strategy, the city and county began creating a “green necklace” along the Buffalo Bayou that runs through downtown. Studded with pocket parks and walking and bike trails, this green necklace is transforming downtown from merely a place to go to work into a family- and pedestrian-friendly destination. The site for the Harris County Jury Assembly Building sits along this green necklace. So how did Hoar Construction build a new structure while also satisfying the greening strategy? Simple: we built it underground.

A GLASS JEWEL BOX IN A PARK

The Harris County Transportation Plaza, Jury Assembly Building and Tunnel Renovation project form the centerpiece for the recently consolidated Harris County Courts Complex (the 6th largest courts complex in the country). The site was originally a parking lot, so to create a new building while also satisfying the greening strategy, the Jury Assembly Building sits 85% below grade. The other 15% – an architecturally striking glass pavilion – stands above ground in the new park, complete with benches and lush landscaping. The park fits perfectly into the county and city’s green master plan, serving as a public gathering spot that the county now leases for parties and special events. Jurors enter the building through the pavilion and then head to one of four underground assembly rooms, each with seating for 250 people. Despite being underground, the glass-enclosed pavilion creates a dramatic sense of openness, bathing the lobbies with natural daylight. While building underground certainly satisfied the green need, this decision did present us with one exceptionally complex issue: we would be building directly into Houston’s water table. Only extraordinary attention to detail and careful work would prevent the new Jury Assembly Building from becoming one expensive swimming pool.

Knowing the new Jury Assembly Building had a tremendous potential for leaks, our team implemented a number of strategies and quality control measures to prevent water intrusion, such as collaborating with the manufacturer to verify that every mud slab was fully cured prior to applying waterproofing. Additionally, we developed a project-specific quality control checklist for each step of the waterproofing process. This checklist included electronic leak detection on every square inch of the building envelope. Electronic testing is more expensive, but, to ensure absolute integrity of the waterproofing, we felt it was mandatory. In addition to waterproofing the building, we also had a tunnel system to contend with. Permitting easy and convenient movement of jurors, the Jury Building connects to other buildings in the courts complex via a pedestrian tunnel system. So, not only did we have to make sure the building itself was waterproof, we also had to guarantee the same for every tunnel connection. Coordinating seamlessly with engineers from the Texas Department of Transportation that owns the tunnel system, the team developed a rubber joint system to keep out every drop of water. And, to ensure total waterproofing peace of mind, six sets of eyes monitored the process daily: the Hoar Construction team, our waterproofing sub, the system manufacturer, the testing firm, the envelope consultant and the client.

During our pre-job due diligence, the team discovered the original structure design specified a traditional shoring system, with anchors placed under surrounding streets. Nothing unusual here. Except, in this case, Harris County owned the property for the Jury Building and Houston owned the streets – and the city required a ground lease for the use of its property. Understanding our client’s project budget could not support this leasing fee, the team redesigned the shoring system early in planning. Instead of projecting the anchors out toward the street, the new solution used an innovative design that projected anchors inward. Naturally, there was an increased cost in the redesign, but the new shoring option actually reduced the project cost because less dirt had to be excavated and replaced with backfill. What’s more, the client will realize substantial cost savings over time, since they will not be paying the city a penny in leasing fees.

PLANNING FOR THE WORST

During the summer, Houston’s temperature averages in the 90’s. Imagine being in a building during that time without air conditioning. Now imagine that building is a prison. Not a pretty picture. That situation, however, had a very real potential as we worked on connecting power for the Jury Assembly Building. Utilities for the building had to join to the county’s central utility loop – a loop that provides power for seven buildings (including the county jail). To connect utilities for our building, we would have to turn off the power at the other buildings. Through exhaustive pre-planning, the team anticipated this shutdown and began preparing more than two months in advance. To make the process as smooth as possible, we developed a detailed matrix that outlined exactly when temporary power would have to be supplied at each building and held coordination meetings with managers for every affected building. A week in advance, we brought in, set up and tested the temporary air and power equipment. We then brought the utilities online in phased sessions. (We’re especially happy to report that the county jail remained fully operational during this time.)

Beyond the risks associated with bringing the building’s power online, the team also faced a substantial safety risk. Namely, the job site was an enormous 20-foot deep, 38,000 square-foot hole in the middle of downtown Houston. After taking exacting measures to ensure the safety of pedestrians and traffic, we then looked at the best way to keep our team safe. Drawing on our expertise building high-rise structures, we implemented an innovative safety system that included procedures typically seen on high-rise projects. Specific Hoar Construction employees were individually charged with inspection and maintenance to ensure safe conditions at all times.

A WALK IN THE PARK

As the park surrounding the Jury Assembly Building fills with downtown workers taking their lunch break and parents pushing their kids in strollers, few people will realize the vast amount of planning, attention to detail and expertise that went into the ground directly below them. This building, a true jewel for the residents of Harris County, represents the amazing results that can be achieved by a team dedicated to building something better.