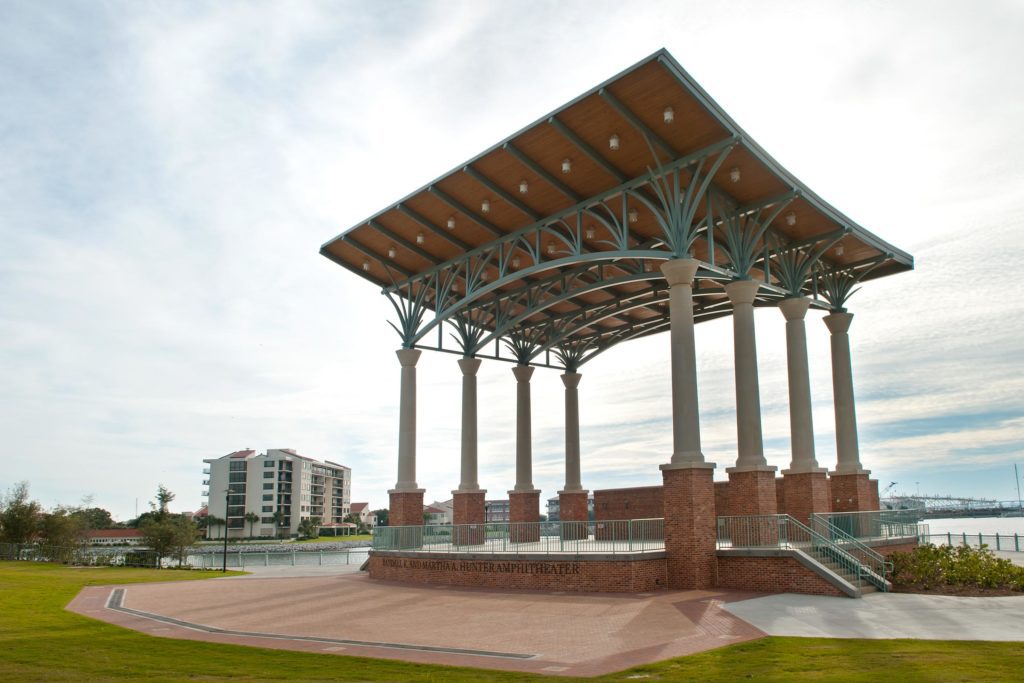 In front of a sellout crowd under picture-perfect skies, the Pensacola Blue Wahoos won their first game 3-1 on April 5, 2012, thanks to a two-run homer by Henry Rodriguez in the bottom of the 8th. Hard to believe that just two years earlier there wasn’t a stadium on this site – just a brownfield that didn’t even have enough land on which to build a stadium. Yet our client had a vision for this area: a first-class baseball stadium and park that would serve as a community destination like no other. Getting there, however, wasn’t simple. Changes to the project’s scope challenged the team to stay within budget and still be ready to play ball on opening day. Only through a truly collaborative effort was the team able to react quickly to changes to make the client’s vision a reality – a reality that included being named the 2012 Ballpark of the Year for all of baseball by baseballparks.com.

AN IMPERFECT SITE PERFECT FOR A STADIUM

The Maritime Park site, located directly on Pensacola Bay, had two major challenges: a brownﬁeld with a variety of special requirements and a size that wasn’t quite large enough to accommodate the project. Without question, it would be a stunning setting for the baseball park our client envisioned, but it was fraught with difﬁculties. Working collaboratively with the civil and structural engineers was key to solving these issues. To create the additional land, the team built a seawall 90 to 100 feet into the Bay. We used steel sheet pilings with a concrete cap, then backﬁlled the area between the existing shoreline and the new bulkhead wall – no Little League feat, but just what the owner needed for roads and an amphitheater that would round out the project. The brownﬁeld designation meant dirt couldn’t be removed from the job site, air monitoring was required for all underground work and the site had to be “capped” with a two-foot layer of clean, imported dirt. Plus, the soil had major settlement implications. To make sure the stadium’s seats wouldn’t sink into the Bay, we constructed all building structures on a deep foundation auger cast pile system. Next, we just had to build a stadium. But which stadium?

Initially, we were hired to build a stadium for the Pensacola Pelicans, an independent minor league team. After installing the foundation and starting the structural steel, there was a change in the game plan: an existing AA Southern League team would be moving to this stadium. A new team in a different league meant major league changes. Instead of a basic stadium with seating for 2,000, an AA league stadium requires 5,000 seats, as well as additional restrooms, concession facilities and press box space. It would also need additional ofﬁce space and upgrades to the playing ﬁeld and the team locker rooms. One thing didn’t change: opening day would still be in April 2012. In an owner’s board meeting, we were asked the million-dollar question, “Would the stadium be completed on time?” Knowing it would require a redoubled effort, schedule revisions and similar commitments from our partners and team members, we answered, “Yes, we guarantee it.” On April 5, 2012 – as scheduled – the Pensacola Blue Wahoos played their ﬁrst game in their new stadium, beating the Montgomery Biscuits.

Midway through the project, our primary client, the City of Pensacola, changed from a city council to a mayor-led government. To meet our completion deadline (the deadline we guaranteed), we worked closely with the new mayor and his team. Hoar leaders personally met with the mayor to establish a relationship and map out a plan to ensure deadlines would be met. Opening this line of communication helped to streamline the approval process and keep the project moving as scheduled. It didn’t, however, mean it would be easy. Just as work was scheduled to start on a retention pond, the client asked us to change the pond into a lake to give the park (and the community) an added feature. Even though changes always cause some anxiety, we liked this one. A lake would enhance the park and provide the community with an even better destination. The addition required a redesign of the site and the storm water system, but since we had already established good relationships, we were able to work seamlessly with the mayor’s office, our design and construction team and the state of Florida to increase the attractiveness of the park.

In addition to the park, part of the project included dredging an area in the Bay to make it accessible for boat trafﬁc. This necessitated the excavation of approximately 17,000 CYs of sand. Required to use a “closed cell” method (sort of like vacuuming the bottom of the Bay), any water removed from the Bay could not be returned to the Bay. To hold the sand and water (typically consisting of 20% sand and 80% water), the team constructed a basin on site. In most cases, the basin would allow the water to perk into the ground, leaving sand that could be used as ﬁll or hauled off site. But not in this case. After a couple of days of dredging, the basin was full and wasn’t perking. This not only put the dredging at a standstill, but also threatened the timeline of the entire project. Stuck with a full basin and 14,000,000 gallons of water, we consulted with experts and looked for solutions – and found one right across the street: a wastewater treatment facility. Collaborating with the Emerald Coast Utility Authority, our group started pumping water across the site, under Main Street and into the facility. Pumping 24 hours a day, the water was soon drained and the project was back on schedule to make that ever-nearing opening date.

A number of activities on this project, such as dredging, the creation of a new wetland mitigation area and construction on a brownﬁeld, required new site-speciﬁc quality control plans. If not completed correctly, these high-risk activities could have catastrophic consequences for the environment (and signiﬁcant ﬁnes and sanctions). Wanting neither of those, we worked closely with design professionals, subcontractors and even fellow contractors with expertise in these areas to create our quality control plans. We then met with jurisdictional authorities from the Florida Department of Health, Florida Department of Environmental Protection and the Army Corps of Engineers before, during and after completing these activities to ensure the work complied with permitted standards and it was documented properly. As a result of this cooperative effort, these risky activities were completed without incident, the work was certiﬁed, permits were closed and our client was ready for opening day.

Working within a project’s budget may not always be easy, but it’s our job to complete a project for the set budget regardless of obstacles. When the stadium at Maritime Park changed to AA, we worked with the design team to identify deﬁciencies in the current design and presented the owner with a list of needed changes along with pricing for each item. Compared to traditional value engineering where drawings are completed and priced only to discover the budget is exceeded and the design has to be redone, our collaborative approach allowed the owner to prioritize based on need and value. Questioning every aspect of the job also helped to maintain the budget. For instance, instead of using pavers from California as suggested in the original design, we sourced the pavers locally. A local source meant lower freight costs, saving +/- 50% on this scope of work alone. Another time, we suggested small adjustments in the stadium light pole height that reduced the overall ﬁxture count (and cost). Though seemingly small, questioning individual elements and making changes resulted in signiﬁcant savings for the owner. By using this approach, we were able to deliver the stadium and the enhancements on time and within budget.

The Blue Wahoos’ inaugural season stats are impressive: 40 sellouts in 68 home games, season tickets sold out nearly a month before opening day and more than 300,000 in attendance (highest in the Southern League). More impressive, however, is the tremendous cooperation we received from the team owners, the city of Pensacola and state of Florida to bring our client’s vision to life. No matter how many changes, we continued to work as a team to complete a project the community will enjoy for years to come – one that will stand as a testament to what teamwork is all about.