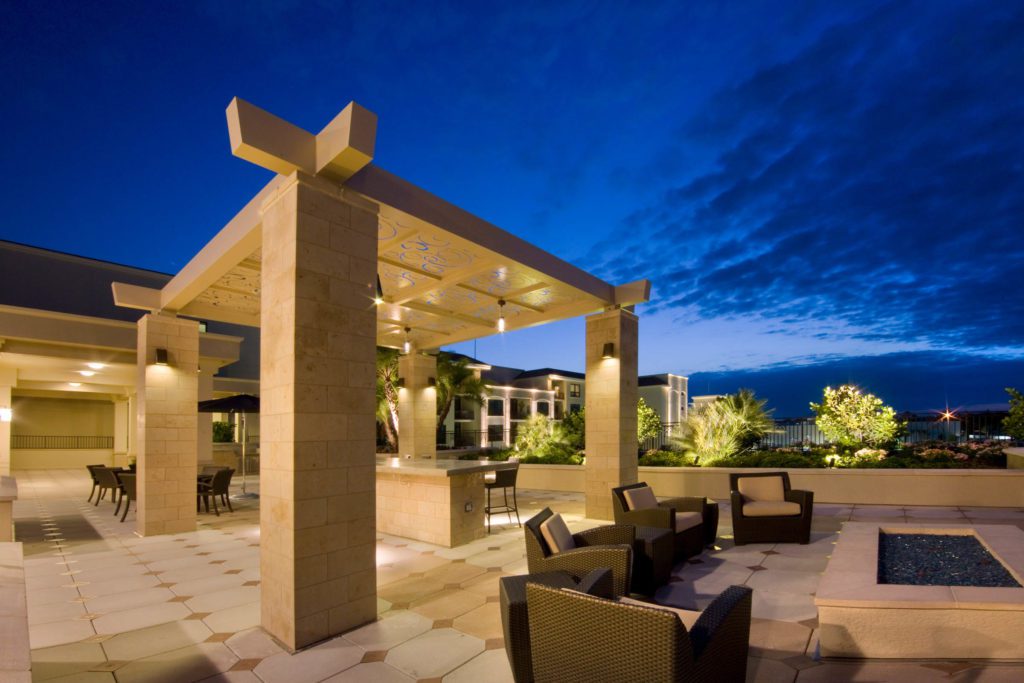 Mercato called for a world-class, mixed-use property of condos, offices and retail serving an elite clientele in Naples, Florida, one of the highest per capita income cities in the country. From our very first interview, the client stressed that “industry standards” would not be good enough. The final product would have to be flawless. That’s exactly what their tenants and condo owners demanded – and that’s exactly what they received.

TORTOISES DIDN’T SLOW US DOWN

The natural land adjacent to Mercato property served as a habitat to the Gopher Tortoise, a species that requires protection. In instances like this, many development projects would try to fight the protection requirement. We didn’t feel the same. Plus, we knew that protracted litigation would cost our client money and time. Instead, we worked with the Florida Natural Resource Conservation Services (FNRCS) to develop a plan to protect the tortoises. The initial cost projections for fencing and preserving vegetation for the tortoises exceeded $60,000. Even though the owner accepted this responsibility we sought a plan to relocate the tortoises. With the help of a local planning engineer, we located an acceptable wildlife preserve and moved the tortoises resolving the issue for $4,800. Saving time. Saving money. And protecting tortoises.

THE RIGHT TEAM MAKES ALL THE DIFFERENCE

Timing for the opening of Mercato presented us with a classic catch-22 dilemma: the owner didn’t want residents moving into their condos until the retail opened, but retail tenants wanted to open their businesses when residents had moved into their condos. The only solution for such a large development with so many parties involved was a masterfully coordinated schedule consisting of staggered construction starts. Buildings that took longer to build would be started earlier and those requiring less time would start later. This highly choreographed schedule would allow all building openings to coincide. To successfully maintain this schedule and realize the client’s vision for this massive project, we assembled a core team of field and project management staff who had experience in complex sites with retail and residential components. This team provided the phasing plans, preliminary schedules, budgets, and traffic and tenant coordination schemes. Additionally, the team worked closely to oversee and assist subs so they didn’t miss deadlines. With the right personnel in place, we put more than $10 million of construction in place each month. As a result, the condo owners and retail tenants – well, they occupied their brilliant new spaces at the same time.

INSTALLING WOOD FLOORS ON THE CEILING

As you would expect with luxury condos, Mercato buyers wanted the option to customize their units to match their personal tastes. This meant buyers could customize flooring, kitchen and bath cabinets, countertops, lighting and bath fixtures, and paint colors. Nearly endless customization possibilities for 92 units – and our team was responsible for all of it, including pricing, obtaining owner approval and, of course, installation. Since Mercato owners also demanded flawless execution on every aspect of this project, attention to detail had never been more vital. The team developed a specialized logistics system to make sure the right finishes ended up in the right condos. We also researched any requests beyond the ordinary – never saying no without first determining what it would take to satisfy the request. For instance, when one buyer wanted to install wood flooring on the ceiling (yes, you’re reading that correctly), our research found a way to make this a reality. And it ended up looking spectacular!

WHO YOU KNOW HELPS SAVE TIME AND MONEY

Naples is one of the wealthiest cities in the country (a per capita income of $61,141 compared to $41,560 for the U.S.)
with a high cost of living. As a result, and due to the sheer scope of Mercato, the size of the local labor force was insufficient for this project. To resolve this issue, Hoar leveraged its regional and national contacts and brought in subcontractors who could deliver quality, expertise and craftsmanship at the best prices. While you might expect this to increase costs, by marrying specialties and picking the right job for the right subcontractors, we saved the owner time and money.

Florida equals water. Building condominiums in South Florida always presents a challenge because of the likelihood of water infiltration. Industry standards specify that 10% of the windows and doors on a project must be tested for leaks. While that’s standard, 10% wasn’t good enough for us. We performed negative pressure tests on 100% of the windows and doors to ensure absolutely no possibility for water migration. We’re serious about the quality of our work. In fact, we’ve built our business on it.