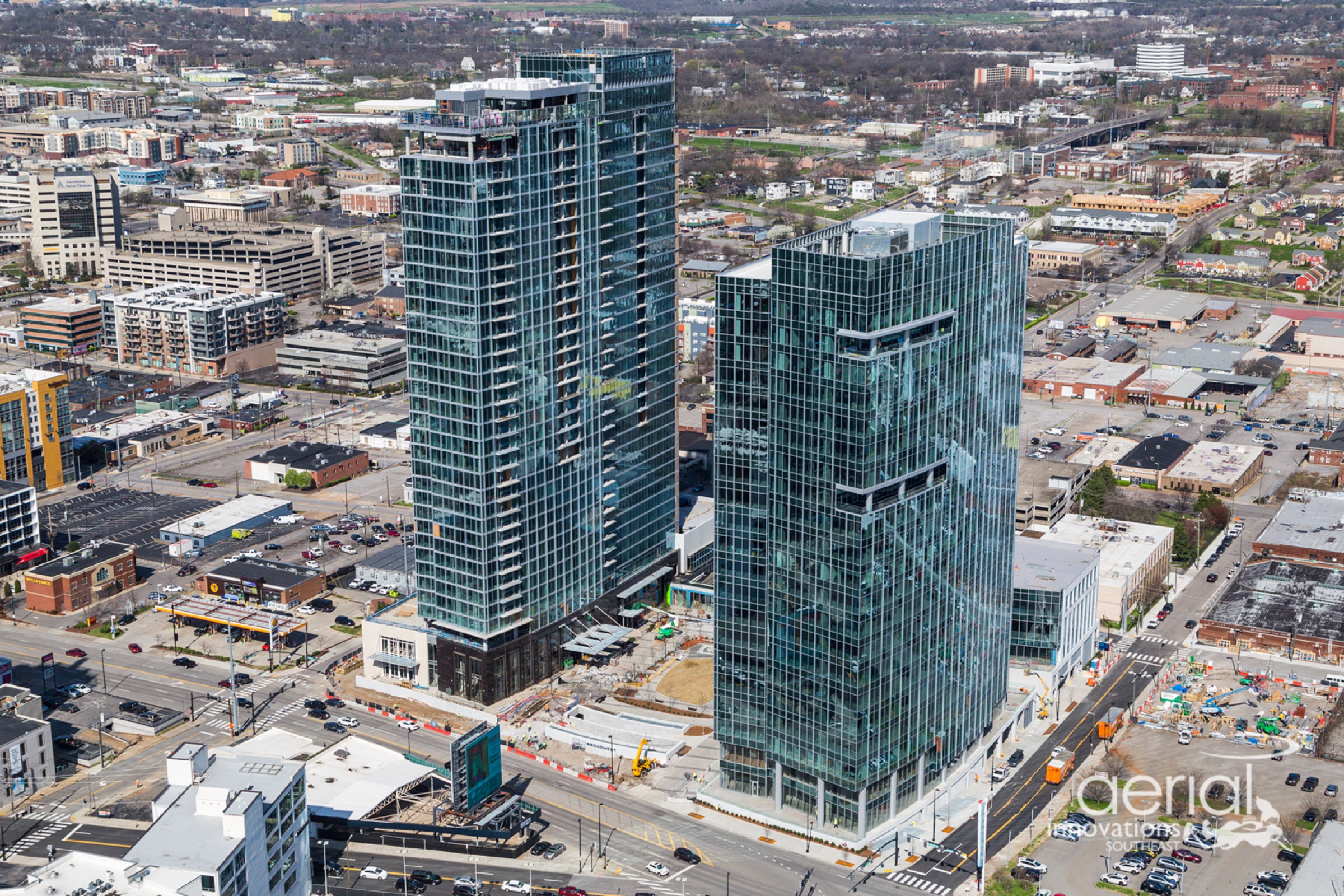 Until recently, the luxury condo market seemed non-existent in Nashville. In fact, if you go back a few years further — Nashville was the city where people mostly lived in the suburbs and then drove into the city for work and maybe dinner and a show on the weekends. That, of course, has changed dramatically. Large companies like Oracle, Amazon, Mitsubishi, and many more have seen the appeal of the southeastern market and have set up hubs in Nashville and other major southeastern cities, driving a mass relocation of people from California, New York, or Chicago. We’ve written in detail about how the population growth has created a demand for apartments and the ability to live downtown. The multifamily boom has been going on for a few years and doesn’t show signs of slowing down. What is new, however, is the increasing demand for high-end condos.

For people who want to live, work, and play in downtown Nashville, but don’t want to throw away rent money every month, a condo seems like a great solution. It offers homeowners the ability to invest in a property that is only appreciating in value as Nashville continues to grow and develop with new office towers and mixed-use developments that complement Music City’s downtown life. With condos, the risk for developers is if you don’t sell every unit, you risk sitting on a lot of capital. While that may have been a very real risk five years ago, it doesn’t seem to be happening now. We are a few months away from completing a large condo tower in downtown Nashville and it’s already sold out, and we are slated to begin two more luxury condo projects third quarter this year.

Another benefit of building condos, at least for developers, is as soon as you sell the units — you get to cash out and move on. With apartments, you must maintain the property, handle maintenance issues, and keep each unit pristine to be able to rent it to the next tenant. With condos that responsibility falls on the HOA and each condo owner. I should note for general contractors, there is the potential for increased warranty work. You don’t have a punch list for one owner — Instead you have punch lists for each new condo owner, all with varying opinions of what “acceptable quality” means. That’s why it’s critical to have a proven Quality Assurance program in place while the work is being done.

Demand is high and the market is hot. If it makes sense for you to invest in a new condo project, here’s a few things I’ve learned in building high-end condos in a highly populated urban area:

If you’ve read some of our recent articles, you’ve heard our advice to partner with your Design/Build team as early as possible. But it’s worth discussing early contractor involvement in the context of luxury condos. We know that critical path building materials like steel and lumber have reached historic high costs and lead times, but we’re also having a difficult time securing materials like high-end paints in large quantities. The key difference in building condos vs. apartments is each unit is built with the same high-end quality finishes and attention to detail as building a single-family home. When people are purchasing, not renting, they rightfully expect an increased level of luxury. That being said, these high-end items are even more difficult to secure right now with the current supply chain challenges. We’re not just getting one or two letters from manufacturers notifying us of a delay, we’re getting anywhere from five to ten notifications on materials per trade. Which leads me to my next point:

Changing the traditional order of the way we plan, design, and build can be uncomfortable for everyone involved. For our owners, it is especially hard to ask them to finalize design decisions ranging from amenity area lighting to finishes before we even break ground. In the past, we would build full-scale mock-ups so our owners could see every item in place and have the opportunity to change their minds about certain options. While we still build mock-ups, the fact is we don’t have the luxury of making last minute changes on certain building materials. We’re already having to order bulk items months earlier than needed. My advice would be to trust your design team and general contractor and work with them to make confident selections down to the specific hardware and door hinges — or risk having something as small as a cabinet pull that’s not available throw your project off schedule further down the line.

Another benefit of making design decisions early is that we’re able to release concrete, infrastructure, or steel packages early. The labor market is extremely strained right now and our trade partners need something in writing to start ordering materials and be locked in on a project. By securing our key trades and ordering materials early in the project timeline, we’re able to avoid labor or material costs going up later in the project.

4. Make Room in the Budget for Inflation

With pricing and the supply chain the way it is, even if you make your decisions and order early, you may still find costs go up between the time you make your choices and the moment you lock in the prices. The market is that volatile. Our advice has been to build in that inflation protection by not overdesigning your project to your maximum budget. Start with some room and if your general contractor is able to secure the trade partners, materials, and other building costs within that budget — we can add some increased luxury options back into the project.

The market is better than ever for multifamily developers to take on a condo project. We’re seeing the increasing demand for luxury condos in Nashville and other growing cities across the southeast, and the supply hasn’t come close to maxing out. By partnering with an experienced general contractor and design team early, making key decisions as soon as possible, and building inflation projection into your budget, your project stands to benefit from a strong return on investment and could even sell out by the time you’re ready to open the doors.