Preserving 100 Years of History and Our Reputation 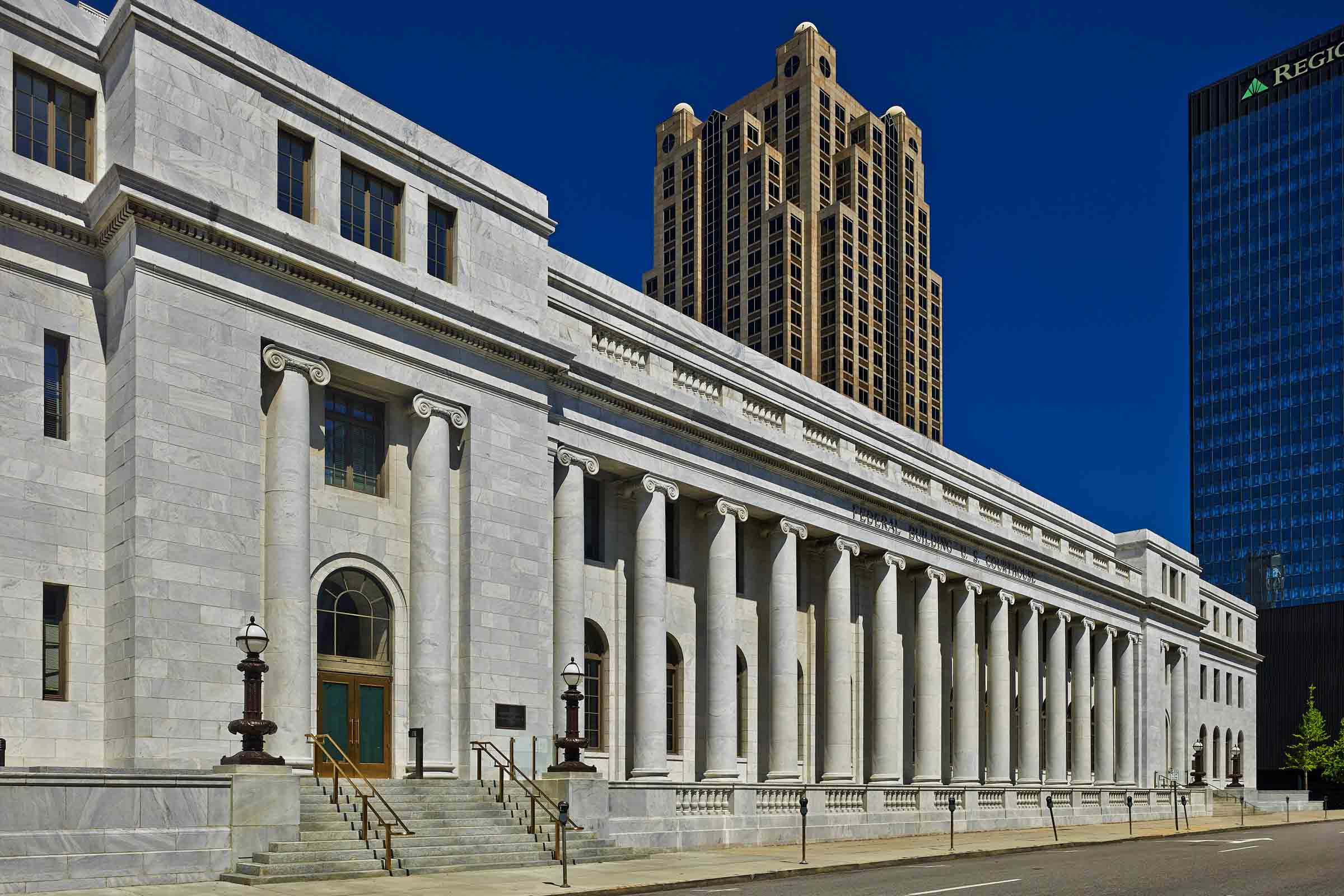 Designed in 1916 and built in 1921, the Robert S. Vance Federal Building and U.S. Courthouse has stood watch over downtown Birmingham, Alabama, for nearly a century. Today, it’s home to federal bankruptcy courts, senators’ offices, the Department of Homeland Security, and federal probation offices. When awarded the assignment to renovate and restore this treasured jewel, we knew we were facing a task as weighty as the marble lining the lobby floor. After all, we would not only have to satisfy the federal government, two historical groups, and the people of Birmingham – but also our own high standards. Failing to do so could put our 70-year-old reputation for quality on the line.

Under the watchful eye of the National Register of Historic Places and the Birmingham Historical Society, and with guidance from the Alabama State Historical Commission, the Vance Federal Building was divided into different preservation zones that dictated the renovation process. While some areas could be modernized, others had to be updated with period-appropriate finishes and fixtures. Others still had to be preserved as originally constructed. As an added requirement, we had to update the building to LEED Silver standards, with low-energy lighting, a 60,000-gallon cistern for greywater recycling, and front windows that were both energy-efficient and, due to the nature of the work going on within, blast-resistant. Satisfying all requirements necessitated precise attention to detail and planning. Nothing, though, could have prepared us for everything we encountered.

THE INEXPLICABLE AND THE IMPOSSIBLE

Like every historic building, this structure had hidden surprises – with new ones revealed seemingly every day. For instance, early on in the (extremely careful) demolition process, we uncovered a monitor’s walk, a catwalk high above what had been a post office but today houses a courtroom. On the monitor’s walk, the postal inspector could oversee the mail sorting, particularly important since people commonly sent cash through the mail. Another discovery: a “stair to nowhere” that appeared to end at a blank wall. Ultimately the team found that the wall closed off the office of the postal clerk who, starting from his office, would carry money to the treasury building across the street via an underground tunnel. Finally, we discovered a gravity-defying “mystery beam” and a terracotta arch system holding up the fourth floor. Even with our modern construction knowledge, we couldn’t see any reason why either of these should still be standing. We saw these surprises not as obstacles, but as opportunities to employ our creativity to match the ingenuity and skill of the original builders.

While Hoar Construction has deep experience renovating occupied buildings, historical restoration features more complexities (such as having to track down original shop drawings to allow us to create reproduction lamps for the lobby). To ensure quality on the Vance Federal Building, we partnered with a team of restoration experts. Aided by their knowledge, we identified and resolved many issues before they became problems. They also increased our awareness of historic details and aesthetics as we preserved or reproduced a multitude of items, such as restoring the original sashes on the arched front windows, replacing the ancient glazing with double-paned historical replicas, and preserving the brass fittings on the elevators. To solve the mystery of the still-standing arches, we found another partner: amazon.com. A 1916 construction manual in its vast collection finally shed light on the arches’ enigmatic architecture. Of course, we also had to deliver this level of detail not to just what we did, but also to how we did it. For instance, to avoid damaging the 100-year-old marble floor, we laid scrap carpet upside down and covered it with plywood. Like some buildings, attention to detail has timeless value.

To restore the original mail sorting facility (now a courtroom) back to its former glory, our team needed to replace three skylights that had been taken out over the years and filled in with concrete. Always a fan of the “measure twice, cut once” philosophy, our team’s first step was to laser-scan the entire area and then create a 3D model to plan the renovation. Next, we moved concrete beams and other support structures to prepare for the installation of the replica skylights. This process, though, created an additional problem: a 70’ x 40’ hole in the roof. Rather than merely cover the hole, our team installed upside-down funnels on the roof with pumps to keep the rain out of the opening. This innovative solution demonstrated its worth, with the skylights going up seamlessly and without a drop of water infiltration. Unfortunately, the roof wasn’t the sole water issue we would face.

In addition to preventing water infiltration at the top of the building, we also had to prevent it at its bottom. After resolving the roof issue, the team went to work waterproofing the base of the building, not an easy feat considering the building sat nearly flush against the street. Our only solution was to hand-dig a trench 15 feet deep around the building’s perimeter and shore up the sides in order to create a waterproof barrier. Additionally, all sanitary and stormwater plumbing in the basement had deteriorated. Replacing it would require the removal of 75,000 square feet of concrete. Naturally, we looked for an innovative, high-tech solution for removing the concrete. But the only way we could move equipment in or out was through an ancient coal chute and since gas-powered equipment in the confined basement space would be dangerous, our only solution was to perform work the same way the original builders had 90 years earlier: by hand, one shovelful at a time, one wheelbarrow at a time.

In addition to oversight from historical groups, the team also had to perform under the supervision of the federal government. To ensure the project progressed as quickly as possible even with the supervision, we remained in continual contact with the structural engineer in Washington, D.C., who was overseeing the work. Initially, every change or new discovery required a visit from the engineer, delaying the project. Over time, though, thanks to the quality of our work and by simply doing exactly what we said we would do, we gained the engineer’s trust. Soon a phone consultation was all it took to gain approval for changes and keep the project on schedule. Additionally, we stayed in close contact with building management. By establishing this relationship and working as a team, we could more efficiently schedule work and utility changeovers, causing only minimal disruption to the day-to-day activities that were still taking place all around us in the building. This spirit of partnership has always been a trademark of Hoar Construction – and once again proved invaluable in helping to keep a project on budget and schedule.

LIVING UP TO OUR OWN STANDARDS

As a federal property, the Vance Building didn’t fall under the jurisdiction of the city building inspectors, meaning we could have taken shortcuts to save time and money. We could have done that, but our values would never allow it. Instead, we took the role of building inspector upon ourselves, putting each stage of the project through a rigorous series of inspections. If the work didn’t meet our exacting standards, construction was not allowed to continue. Results from all inspections went into binders for future reference and, while under no obligation to do so, we invited the city building inspector and the fire department to walk through the building with us. For all of us at Hoar Construction, it’s simple: we’re committed to building better whether or not anyone is watching over our shoulders.

The importance and impact of this project went beyond satisfying historical societies and structural engineers in Washington. We had a responsibility to the architects, engineers, and subcontractors to facilitate the completion of a project full of challenges and surprises. We had a responsibility to the taxpayers, to use their funds for a successful renovation and not be another story of wasteful government spending. And we had a responsibility to ourselves to prove our own reputation for quality. This stunning example of historic architecture gave us the opportunity to do just that. Built to our own standards of excellence, this building that has graced downtown Birmingham for nearly 100 years will continue to stand for the next one hundred.

Learn more about our civic and government work here.